On the beautiful island of Vaxholm just outside of Stockholm, about 20 prominent researchers met during two days in June, to discuss some of their most recent work. It all fit nicely into the theme of the conference: The Economics of Culture and Institutions. Moreover, this research is highly pertinent to current policy debates. The IFN Stockholm Conference was first organized in 2000, and it has become a classic feature of academic life in Stockholm. It is organized, on a rolling basis, by the research programs of the Institute. This year, the turn had come to the program Institutions, Markets and Enterprise, a program where core questions concern the importance of values, attitudes and laws for how societies, markets and companies function.

The theme of the conference was The Economics of Culture and Institutions. Below, we summarize the scientific contributions, grouped around some recurring themes. It bears noting that all presented work was preliminary and subject to revision. Furthermore, there are co-authors of the papers not mentioned here.

IFN is very grateful indeed for financial support to the conference from Riksbankens Jubileumsfond and from Jan Wallanders och Tom Hedelius stiftelse.

"It’s really nice to get the opportunity to interact with more senior colleagues and build new networks. Also, Vaxholm is such a beautiful place!" What Are The Effects of Markets on Morality?
Eelke de Jong, Radboud University Nijmegen, presented a paper aiming at testing the relationship between market activity and civil morality. Here, market activity refers to the degree to which people are or want to be active in the labor market. Civic morality is measured by three types of attitudes: whether people think it is justifiable to claim government benefits to which you are not entitled; to avoid paying a fare on public transport; and to cheat on taxes. In the regions of the EU, it largely seems like more market activity is associated with attitudes that signal a higher degree of civic morality. "To me it seems there is a hope that markets will make people more moral outside of the markets. That people will become better citizens for example. In that case, it is important to understand precisely where and how these moral effects take place."

In fact, he presented some ideas on the so called hustler effect, where con men start taking pride in illegal behavior. Erwin Dekker continues:

"My argument is that the hustler ethic emerged when kids started thinking that their parents believed in an illusion; namely, that everyone has equal and fair chances on an open market. These kids, at the fringes of society, needed to find another dignity. They were given a negative label, which they started to use as a badge of honor." 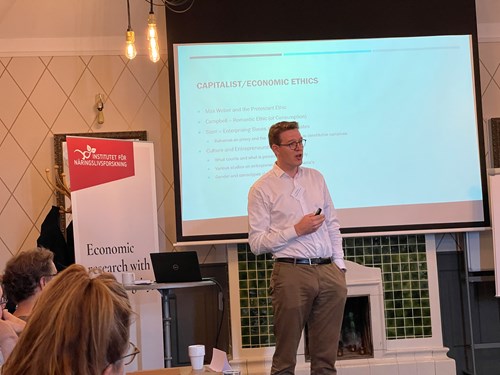 Covid-Battling Measures and Constitutional Loyalty
Jerg Gutmann, University of Hamburg, presented an experiment testing to what degree people think it is important that the government follows the constitution when undertaking Covid-battling measures. He finds that a majority is still in favor of facial masks, business shutdowns and travel bans even if the measure in question would be declared by a court to be an obvious violation of the constitution. However without this declaration, it seems like people to an even higher extent support the measures. Freedom of Expression: A Facilitator of or Guardian against Violence?
Freedom of expression could create social conflict and hatred. On the other hand, it could also function as a substitute for violence. Christian Bjørnskov, Aarhus University and IFN, presented a paper aiming at clarifying this theoretic ambiguity. Some preliminary results suggest that more freedom of speech is associated with less severe conflicts; however, there is no effect on the severity of conflicts. Does Size Matter for the Level of Perceived Corruption?
Pierre-Guillaume Méon, Université Libre de Bruxelles, uses new French survey data to estimate the effect of municipality size on the perceived level of corruption. Some preliminary results indicate that municipalities with larger populations have a higher level of perceived corruption, irrespective of actual corruption. The Effects of Direct Democracy on Education in Swedish Municipalities
Therese Nilsson, Lund University and IFN, gave a presentation concerning effects of the political-regime type on educational investment. Exploiting a natural experiment following a Swedish institutional change in 1938, she finds that municipalities with representative democracy tended to invest more in education compared to ones having direct democracy. Since political decentralization is often promoted in connection to various aid programs in the developing world, these results could be seen as relevant in discussions of how to best stimulate educational investment in poorer countries today. Social Trust: Determinants and Measurement Issues
Jan Mewes from Lund University gave a presentation focused on whether the design of the welfare state matters for social trust in European countries – mainly with respect to whether the welfare system is selective or universal. He finds no evidence for a general impact of welfare-state design on trust. However, there is evidence suggesting that increases in means-tested healthcare expenditures are associated with decreases in social trust. Niclas Berggren, IFN and Prague University of Economics and Business, gave a presentation on how different kinds of globalization are related to social trust. The study is one of few that relate globalization to social trust. The main finding is that the concerns voiced by some in public discourse, that globalization should undermine social cohesion and trust, are unfounded. If anything, the relationship with trust is positive, although the estimated effects are always small. However, can social trust surveys really be trusted? Andreas Bergh, IFN and Lund University, presented experimental results showing that students were not differentially prone to answer a second part of a survey depending on their level of social trust. Moreover, an analysis of repeated surveys showed that people low on social trust are not more prone to “defect” over time. These preliminary results should be reassuring for any trust researcher, as Bergh concludes:

"It seems like social trust surveys can in fact be trusted." Individual Race Is Fluid over Time
Robbert Rademakers from Radboud University Nijmegen presented work on how analyses of effects of race could be biased depending on what racial measure is used. Individual race is in fact fluid; Rademakers finds significant differences in how race relates to various economic and social outcomes depending on the timing of the racial measure. This highlights the importance of measuring race very consciously. Positive Effects of Communist Education?
Joan Costa-i-Font from the London School of Economics stressed potential benefits of communist education. The education in question was especially focused on, for example, voluntary work and physical activity. The results indicate a positive effect on several health outcomes. Could Immigrant Tolerance Predict their Integration?
Martin Ljunge, IFN, presented evidence that the tolerance level of an immigrant’s home country is a predictor of integration into European societies. These findings could have implications for integration policy. As Ljunge concluded his presentation:

"These findings indicate that integration is not always easily solved with quick policy fixes, since it is a function of a deep-rooted cultural heritage. Still, some research indicates that tolerance can be strengthened, through education, personal contact interventions, information, better institutions and globalization." Why Does Female Genital Cutting Persist?
Ann-Sofie Isaksson, University of Gothenburg and IFN, explored how social convention theory can explain the persistence of female genital cutting in Africa. The main idea is that norms might keep individuals in a negative status quo, as the cost of breaking the norm is too high. If this is the case, prevention policies targeting the group level could be more efficient than if they target individuals. Traditional Norms and Education
Gunes Gokmen from Lund University presented research on whether traditional kinship norms in Tanzania affect parental support of their children’s education. By exploiting a historical border between matrilineal and patrilineal tribes, he attempts to disentangle a causal effect of kinship norms on educational investment for children. The results indicate that parents in matrilineal systems tend to invest less, in terms of for example checking homework and attending parental meetings. This is matched by lower cognitive skills among their kids. There could be several reasons we see these results. For example in matrilineal systems, the mother tends to have more children. Also, these systems tend to be characterized by a higher degree of conflict. This results in less educational investment. Family Culture, Welfare Provision and Gender Equality
Paola Profeta, Bocconi University, presented work on how ancestral family culture – in the form of whether inheritance rules were egalitarian, whether children continued to live with their parents as adults and whether marriages were exogamous – affects the demand for childcare in the United States. Also, she evaluates whether ancestral family culture has any effects on the number of childcare bills and resolutions presented by members of the House of Representatives. The results of the study suggest that family culture indeed matters. For example, there is evidence that an more egalitarian inheritance rules is associated with higher preferences for public childcare expenditures and with more political bills supporting childcare. When asked about the most salient question in her field at the moment, Profeta stressed cultural stereotypes and gender equality:

"We need to know how cultural stereotypes, for example toxic masculinity, affects equality in education and the labor market, in order to be able to target the behavior with good policy. At the moment, women enter, but then they drop out again. If the reason is bad culture, policy to tackle it is crucial to give women true access to these places." As this summary of contributions illustrates, the conference was fortunate to be able to highlight important new research and, through collegial discussion, hopefully improve it. The themes of the papers were overlapping in many cases, which made it easy for bonds to form between the participants. Likewise, the conference illustrated the position of IFN as an important node for highly qualified, new research on institutions and culture. The organizing group consisted of the director of the program, Niclas Berggren, and his colleagues Andreas Bergh, Martin Ljunge and Therese Nilsson, along with executive assistant Elisabeth Gustafsson and research assistants Emma Gunnarsson and Henrik Hällerfors.